This day, September 13th. 2014 sees the final stage in my journey come to an end. I will leave behind scenes so incomprehensible, my mind has been unable to attribute the words necessary to come to terms with what happened at Auschwitz and Birkenau!

1937 September 13th. Jews in ‘protective custody’ can be released if emigrating.

1942 September 13th. 4,000 of Checiny’s Jews are murdered at Treblinka while the Battle for Stalingrad is underway.

1943 September 13th. Lida Ghetto liquidated. Rumour mounts that Globocnik has been accumulating wealth from his ideological role! Globocnik relieved of his overall Command of ‘Operation Reinhard’ and is posted to fight the partisans in Yugoslavia as the HSSPF Adriatic.

1944 September 13th. US Bombers hit targets within the Auschwitz complex of Camps, some falling on Auschwitz I and Birkenau. The truth that Auschwitz and even Birkenau could not be targeted and Bombed, preventing further Gassings, lies exposed. With US Forces at liberty to strike where it feels, from bases in Italy, it is an incalculable measure of those Jewish lives forfeited who could have been saved. With the right strategy, aimed at alleviating their suffering and prevention of their Destruction, Hungarian Jewry might have at least been spared? Meanwhile the Russian liberating Forces are along the Slovak border. The collapse of the Nazi regime is imminent. Hitler will seek a cowardly withdrawal from existence.

His ill-conceived thousand year Reich will be in tatters while the German people will be left to rue the day they trusted a man whose ego was larger than a People’s needs and far more damaging of all morality than History has ever recorded! At the time of Eichmann’s Trial we are reminded by Golda Meir, that in the History of The Holocaust since the events upon which we write, comment upon and attempt even to comprehend, Revenge has not been the criteria by which the Guilty, the Perpetrator or the Participator has been Tried.

“..This is not a matter of revenge. ..Hebrew poet Bialik says: ‘Revenge for a small child ..devil has not yet devised’.” Golda Meir.

I have now walked in the Steps of the Condemned and the Murdered and it is to those of You who have entered an arena full of expectation and wishing to add toward the Memorial of the most heinous Crime to ever face Humanity that I wish to relate this to! You are the ones I wish to thank for Your good will, for Your respondent nature and for Your best wishes! I have been on this, The Holocaust of research, an odyssey that has been ever present for quite some time, and while it galls me to have to correct the lies, I do so in earnest! For me, it is the satisfaction in knowing that there are more of us who know, accept and believe in the Truth which The Holocaust has brought to our own History. It is a History of shocking violence and the unprecedented Destruction of a People, The Jewish People! In the comprehension we must all seek, if not to understand why such a Catastrophe was forced upon the Jews of Europe, or even as to why we stood so idly by while this Atrocity was Perpetrated.

“..a rush to get everything down in writing before the generation of survivors dies away. There is also a search for knowledge and understanding by ..descendants of survivors ..leading ..young to rediscover their Jewish heritage. Jews are proudly calling themselves Jews once more. ..young people of today will be ..leaders of ..next generation. They and people of all nations have an obligation to protect ..memory of The Holocaust.” Ann Kazimirski.

For History, and for the sake of our own Humanity, we must look back and learn from all that which will allow us to go forward with knowledge. That knowledge cannot be blurred by the home spun theatrics of so called ‘revisionists’ whose only agenda is to deny these 6,000,000 Jews a resting place we wish to call The Holocaust! Their hatred for the Many Jews who lost their lives is obscured by the mentality of these few who do not see that their denial in History discolours the Truth! The very Fact of the loss to ALL of Humanity of 6,000,000 Jewish Lives, must make us accept We all have a responsibility to all those who live in this World, and for those whose existence has been removed to another World or Spiritual plain! This all casts a huge shadow over what we term as Christianity, but Morality and even the Ethics of Tolerance are so defaced by the obfuscation the deniers seek!

So I will move to continue my task and with that: Thank You once again to all those of You who persist in acknowledging my small attempt here is to make a difference? I aim to show that Tolerance has much to learn and together we can show that Indifference to the struggles of others tarnishes our very reason for Being! We are as one People under whatever guise we wish to describe our God! For those who do not have a God? My God looks out for them! Plato has said that only the Dead see the end to War, so maybe only The 6,000,000 have not only seen the effects of The Holocaust, but they will not see its like again! The ramifications for us, which are still being felt, has been the searing pain of that particular Genocide, but also the rippling effects of newer destructions of Innocents! So before I start, I have responses to the World which has availed itself of such an intolerable bloodshed.

These communicators fall into certain categories! I will not dwell on those whose frauds are widespread! Whose lies are tantamount to the attempted alteration of History and whose antisemitic rhetoric and subversive nature barely conceals their rancid treatment of those Jews, 6,000,000 of whom I wish to Recall, Always to Remember and most certainly Never to Forget. This has been Patrick Dempsey impressing upon you all. What have I been impressing about? A little bit of Tolerance will go a long way and a defiance against Indifference might just add to the Humanity we wish to impart to those we Love, those we care about and to a World in need of care and attention. In case you think you have got away scot free? If you come across any of my x3 books, please give them a read and know there is someone else out there trying to make a difference:

Testimony and Fading Memory in the Holocaust. 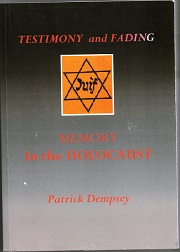 der Einsatzgruppe and the Destruction of European Jewry. 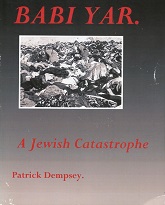 History has taught us little if we choose not to Remember the Slaughter of 6,000,000 Innocent Jewish Men, Women and Their Children in The Holocaust. We must Always look toward a future that has been garnered from our past with the correct lessons to be learned. Tolerance for one and other is specific to human beings and an Indifference to that Moral grounding has been widespread throughout our History! We choose to Forget at our peril because there is no guarantee that when intolerances resurface, they will be directed only toward those Never exempted from Genocide’s pure Hatreds. For those 6,000,000 of The Holocaust of The Jews of Europe, Memory must serve them Now, so that time and no-one can ever Forget them and I will lend a Stone to that place which took so many of them from us, so that the World will know, We Will Never Forget!

They boarded a Cattle Car. They stepped up and took a journey that would catapult them into oblivion. I chose to mark my visit with placing 2 stones to remind those who come after that I was there before them to Remember. They are marked for myself and my Son, Russell, who has joined Me on this emotional visit, though from his own Home in England, where we correspond the ups and downs of a Visit which has spiritual and Historical resonations for me. Elsewhere in The Camp, I have placed a stone for those others of My own Family who could not make the trip. For those I communicate with as a concern for a period in our History we should learn wisely from, otherwise we are forced to then endure the same fate as all those who ignore such lessons.

ALWAYS to REMEMBER, NEVER to FORGET.

7 Replies to “Leaving for Home”