It is Thursday September 28th. 2017 and I am aiming for Treblinka. It is hard not to remonstrate with someone’s god when what awaits me is the hollowed out call from a dark place, Treblinka. I know the Jewish Murdered are there. I do not know how many we seek. I do not know their names even if that is quite Wrong! I do have an idea of the vast number of those Jews of Treblinka who await me! In excess of 700,000 and as many as 1,200,000. All Murdered because they were Jews. There are many others interred here, but these are the subject of an other’s quest, and though they have been intolerably treated, I involve myself in a search for 6,000,000 Murdered Jews. 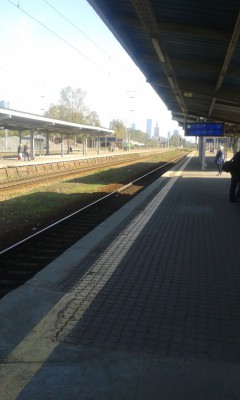 They are not part of my endeavour in finding why we allowed this all to happen and for the Jews of Treblinka and even though I know the names of some of Treblinka’s Jews, all of whom were forcibly transported there, I cannot ever know all who remain here, lost to all practicable efforts to locate and name them. However, I will still follow their route towards an abominable place and will be certain Always to Remember, Never to Forget that for me, I will be on the return train from Malkinia Station to Warsaw. So now, I have walked my customary 4 miles and I have to travel a further 6 miles and I have not even have got any further than Warsaw. 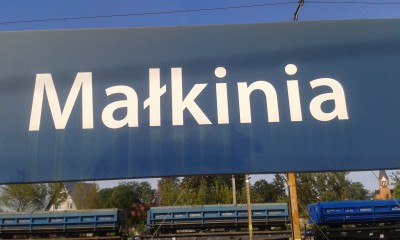 Today I will have walked 10 miles and travelled about another 134 Miles, once I get started. As with Chelmno, my walk on such hallowed ground will not be measured in time nor distance. That would violate the cause I have established for myself. So I will let you in on what seemed farcical, but caused me delay and moments of confusion. My walk to Warsawa Centralna Train Station takes 30 minutes so I set out in good time. But before that eventual journey begins, allow me to take you to the ticket desk at Warsawa Centralna Railway Station. My Polish being what it is, non-existant, I had written where it was I wished to go! TREBLINKA! 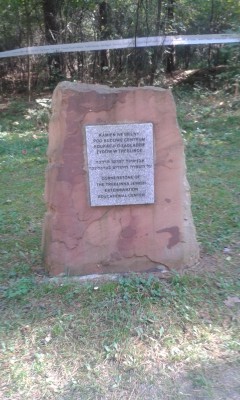 Now bearing in mind that this site of reverence to Polish Jewry, World Jewry and the State of Israel, and lest we forget History we too have a stake in acknowledging the awful crimes here, a State official looked blankly at my piece of paper. Anyway, we move forward and I had arrived at Centralna and asked for my ticket and was informed they do not have trains to where I wished to go. I even showed how it was spelled but I was then sent to another rail official. I was eventually pointed to a Bus Company which would supposedly facilitate my journey to Warsawa Western Railway Station. The Bus Company was certain I had been sent to them purely because they spoke English and the Train people didn’t?? 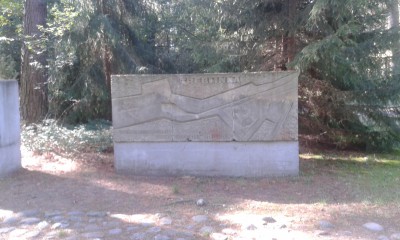 So now I was in a queue for Bus service I did not want? Ah! Polish buses. I am reminded of a previous venture on Polish buses heading to Belzec. As I trudged through knee high snow, and as the Bus which deposited me, the wrong side of Belzec, I was forced to trudge for ever just to reach the Belzec Gates. I actually saw the Bus veer into the distance along the Lvov road and straight past the Death Camp at Belzec, the Camp he obviously had never heard of? Or had he? I needed to get to Treblinka and the Bus Company furnished me with a ticket to get me to Western Station? I paid for the Bus ticket but decided against journeying across Warsaw in a Bus. I was eager to put Warsaw behind me. 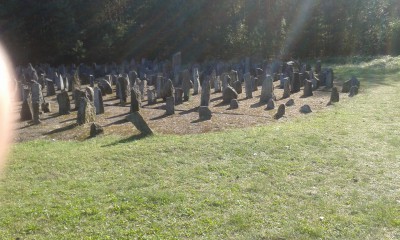 I caught a Taxi which would be quicker. The Taxi Driver takes me to the Westin Hotel? The concierge had to explain to the Taxi driver I wanted the Western Train Station. Eventually, duly set down at said Station, queued in a relentless line of other would be traveller’s and got my Tickets and then set off for the platform. Amazingly. In the distanced I my route toward the Centralna station stood before me in the distance. The train even stopped at Warsawa Centralna to pick up passengers on my way now toward Malkinia! Aggghhhh! I wrote a piece for a Magazine a good while back, and on this day, it appears to appropriate a space in time that has already been consumed.

“..My quest for comprehension of ..events within The Holocaust commenced with ..Murder of a 4 year old Jewish Girl, Tokele. She resided in Sokoly, Poland. Now for a failed catholic like myself ..it is an abhorrence that anyone should be Murdered because of a Faith ..a Belief system ..ethnicity or antecedence. Troubling too that a Child’s life can be so callously destroyed. I am sure that anti-Semitism played a key role in this particular atrocity as it does in ..whole of The Holocaust. It also concerns me that those who have profited within Poland from ..Destruction of 3,000,000 Polish Jews can maintain their supposed christian or even catholic status.” Patrick Dempsey. 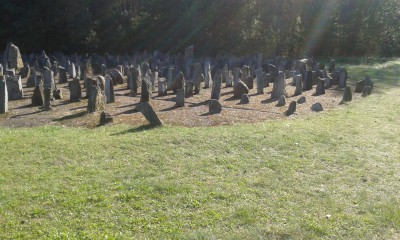 But if all that this sounds like idiocy, I was making My way toward Malkinia and as we all are to be made aware of, Malkinia is the staging post for Warsaw’s Jews to be Destroyed in Treblinka. So in some way I did not mind the mild farce which had got me here, before a sign which reads MALKINIA. The journey itself was time to listen to and talk to Kasia and her Son Patrick which took my attention away from this apprehension and sinking feeling which was gripping me. I arrived after a rather pleasant journey and there before me was that sign, MALKINIA! MALKINIA was not just a place I had heard of, it was a torrent of issues and concerns for the past few years as I tried to add to what I knew of Treblinka, a synonymous resonance with a dark space in our revulsion of what could and was achieved here. 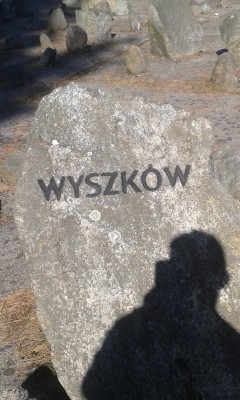 To say I was exhausted is an under statement. But to know I had achieved what I had set out to undertake, and more, has eased a burden I have felt since I began this odyssey, 20 years ago. A promise made has been fulfilled now and I have met with a deeper seated concern that Memory is not fading into a forgotten state. There was a greeting too of sorts, with a Child from a place whose Community name SOKOLY is on a stone here in Treblinka. This is my ultimate reward. I have gone full circle in my search to when Tokele was introduced to me and her Community, many of whom have been laid before us, here in amongst the other 700,000 or 1,200,000 Jews of Treblinka.

That communal place, Sokoly has signalled for all, a time when hatred ruled over life and human decency was eradicated. But while lives have been taken from us, and 6,000,000 constitutes a lot of names now missing from us, we have words, acts and deeds to permanently defend their memory. Is it enough that mention is made of the tragedy they faced? NO! It will never deliver in essence what is lost, what was taken and how all too easily we abandoned so many Human lives. All we can do now is add a measure of remorse to a degree of empathy and know how wrong this World had been in the Catastrophe for 6,000,000 Jews. I will rewrite this, and add to a piece on Treblinka itself, as I will with Chelmno, as they are stand alone atrocity’s in need of a marker beyond a travelogue of sorts.